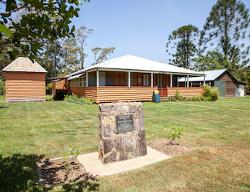 Bankfoot House is the oldest surviving residence in the Glass House Mountains, on Jinibara, Gubbi Gubbi and Kabi Kabi lands, now a state heritage-listed property. William and Mary Grigor established the house in 1868, naming it after Mary's village in Scotland. Cobb & Co coaches, travelling between Brisbane and the Gympie goldfields, used the property as a lunch stop and staging post and independent travellers used Bankfoot House as an overnight stop, paying one shilling for dinner, one shilling for a bed and one shilling to feed and stable their horse. The Grigor, Burgess and Ferris families occupied the house for over 130 years, making a huge contribution to the district in local industries, community life and local government.