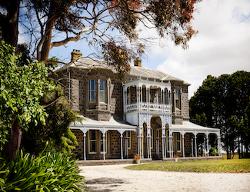 An authentic bluestone mansion and stables set in a sweeping rural landscape within the traditional lands of the Wadawurrung nations, pioneer pastoralist Thomas Austin and his wife Elizabeth built this lavish 42 room mansion in 1871 after finding themselves embarrassed by having to entertain the visiting Duke of Edinburgh at an 'undistinguished homestead'. Thomas Austin died just six months after it was completed, but Elizabeth lived at Barwon Park for many years and became a noted philanthropist. The original interiors of the mansion remain largely intact.