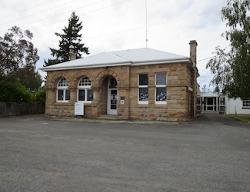 Governor George Arthur named Bothwell after a town in South Lanarkshire, Scotland which lies to the east of Glasgow. In terms of European settlement, Bothwell Historic Town is one of the most historically significant towns in Tasmania with a total of 60 buildings and locations of significant historic interest. There are two 19th century 'gentlemen's residences' near Bothwell, which was established on Palawa land. 'Ratho', which lies to the west of the town on Highland Lakes Road, is a single storey stone house with wooden Ionic columns at the front. Built in the 1830s to a design by architect Andrew Bell it was the home of Scottish business man Alexander Reid. Ratho's great claim to fame is that the Ratho Golf Course is the oldest course in Australia and the oldest known course outside Scotland. Ratho is still a working farm with "grazing sheep maintaining the fairways and fences to keep them from the square greens. The course is a time capsule of how the game began and the way it was played during its first 500 years." It is now over 170 years old.