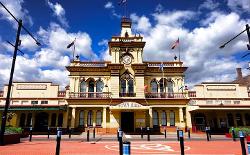 Set in the highlands on the lands of the Ngoorabul people, Glen Innes has a number of street signs in Scottish Gaelic, though no residents speak of that language. There is also a 'Crofter's cottage' and The Australian Standing Stones, based on the Ring of Brodgar in Orkney. Archibald Clunes Innes, from Thrumster, Caithness was a captain in the Third Regiment (Buffs), when he arrived in Australia in 1822 on the Eliza in charge of 170 convicts. He held a number of New England properties including Glen Innes Station and Dundee station.  Glen Innes has a twin town in Scotland - Pitlochry.