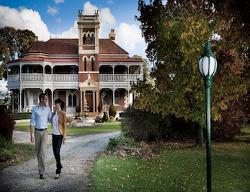 Situated 1 Km south of the township of Walcha in NSW, on the original location of explorer John Oxley's 1818 camp site, Langford is a grand Edwardian two story building constructed of locally produced red brick, featuring 22 rooms and a five story central tower overlooking the circular entrance driveway and extensive surrounding gardens. The Walcha/Armidale area was named after Armadale on the Isle of Skye in Scotland by George James MacDonald, and the traditional owners of this region are the Anaiwan people.