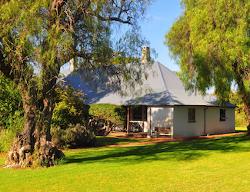 Set on a high bank overlooking the fertile flats of the Murray River, Old Blythewood stands as a testament to the industry, ingenuity and flexibility of the pioneering McLarty family. John and Mary Anne McLarty were amongst the first Europeans to settle in the Murray District and built this house in 1860 as a home, hotel and post office. Old Blythewood was one of the staging inns on the road to Vasse, so contributing to the development of transport links in the south west of the State, and demonstrates the principal characteristics of the Old Colonial Georgian style of architecture in Western Australia.