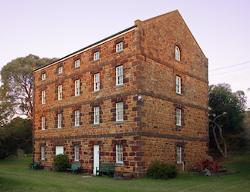 At one time there were over 250 flour mills in Victoria and the Portarlington Mill is one of the oldest to survive. Built on Wadawurrung land in 1857 from locally quarried stone, the mill used steam-driven machinery to prepared flour from grain grown around Geelong's Bellarine Peninsula, then known as the 'granary of the Colony'. The mill only operated for 17 years, closing in 1874. Its machinery was sent to the Wimmera which had become increasingly used for growing grain crops. Its original builder then used the building for his brick works. In the later nineteenth century, it was a factory, first processing seaweed for use as upholstery stuffing, later producing printing ink then artificial fertiliser.