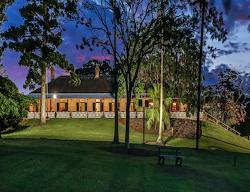 Newstead house is Brisbane's oldest surviving European home, established in 1846 on a parcel of lands originally occupied by the Turrbal People, purchased by Patrick Leslie, a Scottish settler from Meikle Wartle in Aberdeenshire. This iconic landmark has evolved from a simple Georgian cottage into a grand residence following significant renovations and extensions in 1867. The house occupies a commanding position within Newstead Park, with sweeping views of the Hamilton and Bulimba reaches of the Brisbane River. Newstead House is an established house museum, decorated and furnished to reflect the late Victorian period and is a significant part of Brisbane history.