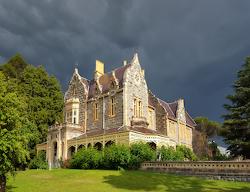 Built on Wiradjuri land in the 1870s by James Horn Stewart, who was born in Edinburgh, Scotland, and originally known as 'The Mount', since 1969 Abercrombie House has been the home of the Morgan family. They have spent the last 50 years restoring and maintaining the magnificent house and its outbuildings and grounds and sharing it with the community asÝan outstanding example of Scottish Baronial style architecture. This venue is unique as a living family home, a 'working house' which is open to the public daily. The drawing room has a 1920s Steinway grand piano and the ballroom has a 108-year-old upright piano. The minstrel's gallery in the ballroom has the oldest pipe organ on mainland Australia... and there may be a ghost in the apple orchard.Ý