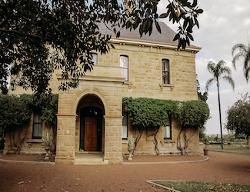 Jimbour is both a tiny village northwest of Brisbane, and also the location of one of the nation's most gracious historical homes - Jimbour - built in 1876 on the lands of the Gamilaraay people. Jimbour Station came into existence in 1841 when Irishman Henry Dennis settled in the area and took up the Jimbour run on behalf of the first owner, Richard Scougall, who had come to Australia from Scotland in 1832.