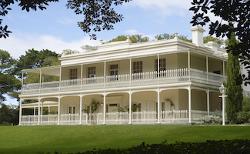 Built in 1847, Como House and Garden is an intriguing mix of Australian Regency and classic Italianate architecture. Como offers a glimpse into the privileged lifestyle of former owners, the Armytage family, who lived there for nearly a century after the property was established on the lands of the Wurundjeri-willam people of the Kulin Nation. The Armytages became famous amongst Melbourne high society and equally famous for their many elegant dances, dinners and receptions. Those elegant dining and reception rooms are still furnished with Armytage family heirlooms and even the servant's areas, kitchen and laundry have been preserved.