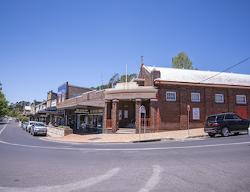 A beautiful town in the Southern Highlands, explorer Charles Throsby referred to the area as 'bantanoon' is a corruption of a Tharawal (Dharawal) Aboriginal word meaning "deep ravine" or 'place of deep gullies'. The Darug and Gundungurra peoples are the traditional owners of the Blue Mountains region. 'Bantanoon' became 'Bundanoon' and it was only a short step from there for someone to declare that it was Scottish and now Brigadoon: The Bundanoon Highland Gathering is held here every April. The cultural and social centre of the community, the Bundanoon Soldiers Memorial Hall was built in the Art Deco style of the 1930s, and is much admired today because of the lovely architecture of the entrance and internal decorative features.