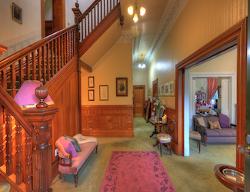 An impressive house and grounds dramatically situated overlooking Queenstown, on the west coast of Tasmania, Penghana was built on Palawa land in the late 1890s. At this time, Queenstown's development of buildings reflected the enormous wealth associated with the company's desire for a corporate identity to project a successful and confident image and inspire investor confidence. This splendid Federation-style house dates from 1898Ýand was owned by the Mount Lyell Mining and Railway Company for 101 years and home to 11 general managers and their families during this time. When the Mount Lyell Mining and Railway Company was disbanded the house was gifted to the people of Queenstown.