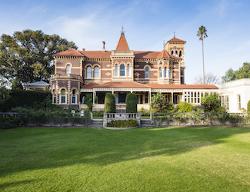 Rippon Lea is a large 19th century mansion surrounded by 7 hectares of Victorian pleasure gardens, built on the traditional lands of the Boon Wurrung and Woiwurrung (Wurundjeri) peoples of the Kulin Nation. It is listed on the National Heritage Register as one of the finest examples of original suburban estate in Australia. In 1868 Sir Frederick Sargood contracted a two-storey, 15 room house be built. An extensive pleasure garden was laid out around the house, together with glasshouses, vegetable gardens and orchards.