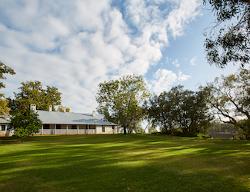 Located on the banks of the Swan River off Johnson Road, Maylands, the traditional lands of the Noongar people, is one of the first farms in the colony and Tranby House is the earliest metro residence still standing. Peninsula Farm offers a unique opportunity to explore the first years of European settlement in Western Australia. Constructed by Joseph Hardey in 1839, Tranby House was the third house he had built on Peninsula Farm, a property originally granted to him in 1830. Over the years the house was added to, expanded outwards and upwards. Several oak, olive and mulberry trees believed to have been planted by the Hardey family remain and surround the house. Two of the oak trees were listed on the National Trust's Register of Significant Trees in 1984.