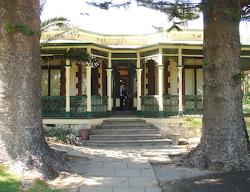 This significant late 19th century Fremantle residence on Noongar land has links to the early European colonists and a  long-standing merchant family strongly represented in local politics. Samson House, along with its contents from 2 generations of the Samson family, was left to the people of Western Australia by Sir Frederick Samson. 'Fred' was elected to the Fremantle City Council in 1936 and became mayor unopposed in 1951. He remained unchallenged in that office until he retired 21 years later in 1972. Samson House was built for Sir Frederick's father, Michael Samson, who was also Lord Mayor of Fremantle. Michael was the son Lionel Samson, one of two brothers who arrived in Western Australia aboard the Calista in 1829. They established an import export business which continues today making it one of the oldest European family businesses in Australia.