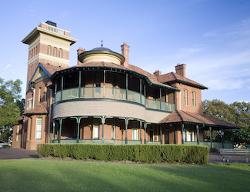 Situated on a hill that overlooks Perth CBD on the traditional lands of the Noongar people, the former Government Astronomer's Residence today houses the central offices of the National Trust of Western Australia.  Astronomer William Earnest Cooke was appointed to the role, and his family moved into the house - staff had to climb the hill above St George's Terrace every day to get to work, but the Cooke family was quite isolated living on Mount Eliza. Part of their responsibilities involved looking out for bushfires coming from Kings Park. One additional function of the observatory was to help the residents accurately set their clocks - a canon fired daily at 1:00pm so people could set their watches.